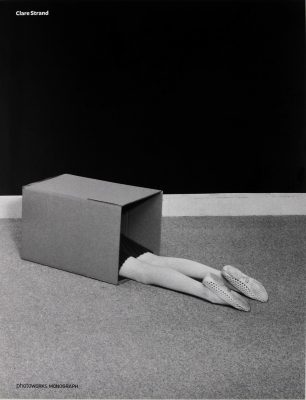 Over the last ten years, dissatisfied with the often complacent values of the photography world, Clare Strand has assembled a body of work that is both subversive and celebratory in its approach to photographic conventions. During this period Strand’s art has developed through a series of increasingly interesting and unique projects that have explored various photographic genres, from Victorian portraiture to crime scene and forensic photography. In these series she has dwelt on the oddity of photography’s strange backwaters, its utilitarian functions and its infiltration of every corner of our lives, to make us question the value and complex meanings of photographic images. This might be simply quirky and strange, but in Strand’s work it is resolved through photographs of incredible quality and genuine originality. In our photographically saturated times, Strand’s work remains distinctively new and difficult to place, and yet it is also uncannily familiar, drawing heavily on the genres she investigates. In recent years she has consistently worked in black and white and has exploited the traditional qualities of the fine print to startling effect. It is the wit, the irony and perverse logic of these formidable black and white series, with their continued clashing and mixing up of photographic ideas and sources, that has won her an international reputation.
(source: https://www.clarestrand.co.uk/publications/?id=117)

About the Artist
Clare Strand (b.1973) lives and works in Brighton. She describes her working method as being like ‘rolling in the grass and seeing what you pick up on your jumper.’ Strand’s constantly evolving practice brings together intensive research, deadpan humour and insights into popular culture, shifting from the mysterious and the absurd to understanding public obsessions, often via trickery and manipulation. Recent exhibited work includes machines to encourage entropy, web programs, looped films, fairground stalls and intricate photographic constructions focusing on, subverting, reimagining and manipulating the medium’s origins.
clarestrand.co.uk
(source: https://scottishzoeidentityandplace.blog/category/coursework/part-2-street-and-studio/project-2-the-aware/)

About the Publisher
Gerhard Steidl began working as a printer and designer in 1968. From political non-fiction he then expanded into literature and selected books on art and photography. Steidl publishes German literature as well as translations from French, English and Icelandic.In 1994 Steidl launched its international photobook program. Today it includes some of the world’s most renowned photographers and artists including Joel Sternfeld, Bruce Davidson, Robert Frank, Robert Adams, Karl Lagerfeld, Lewis Baltz, Dayanita Singh, Ed Ruscha, Roni Horn and Juergen Teller, to name but a few. Every Steidl book distinguishes itself through individual design and production values. Known for his passion for paper, printer and publisher Gerhard Steidl personally selects the paper and binding materials for each title and oversees all aspects of the production process – each Steidl book literally passes through his hands. Over the decades Steidl at Düstere Strasse 4 in Göttingen has become one of the most respected printers in the international publishing world. Whether photography, art, fashion or literature, it is Steidl’s goal to realize the dreams and goals of artists and authors, and to create art in book form.
steidl.de
(source: https://steidl.de/Artists/Gerhard-Steidl-0102055560.html)