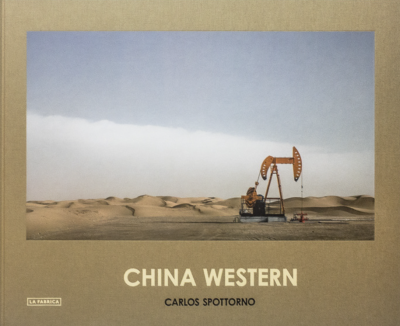 Xinjiang, the westernmost Chinese province, borders with Mongolia, Russia, Kazakhstan, Tajikstan, Kirgizstan, Afghanistan, Pakistan and India. Autochthonous Uighurs are muslim, have Turkik origins, and claim independence for what they call East Turkestan from China, whom they consider an occupying colonial power. Xinjiang is rich in oil and gas, and it’s the Chinese natural way towards Caspian oil reservoirs. China is tightening commercial and political ties with several countries in Central Asia in order to open new commercial land routes to the Caucasus and, eventually, Europe. This project tries to give a broad vision of a complex and poorly known situation that may evolve in ways that could potentially affect the rest of the World.
(source: https://spottorno.com/china-western)

About the Artist
Carlos Spottorno (b. 1971, Budapest) is an Italian photographer. Spottorno initially trained in painting and printmaking, before undertaking a career as an art director in the advertising industry. Since 2001 he has been an active photographer, undertaking long-term photography projects which usually gravitate towards economy, politics and social issues.
spottorno.com
(source: spottorno.com)

About the Publisher
La Fabrica is the publishing area of La Fabrica, a private company of cultural management. They publish books and magazines focused on photography, art and literature as well as making books on behalf of private companies and public institutions.
lafabrica.com