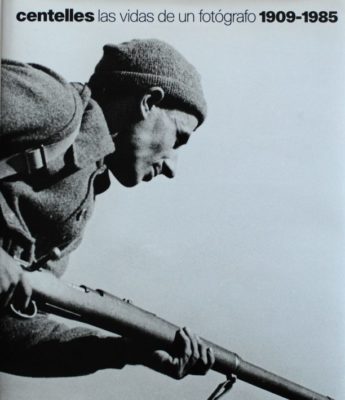 A career retrospective of the famed Spanish photojournalist, Agustin Centelles. Published in conjunction with a show of his work held in Barcelona in 2006.

About the Artist
Agustí Centelles Ossó (b.1909 in Valencia – 1 December 1985 in Barcelona) was a Catalan photographer, working on the Republican side of the Spanish Civil War. As a refugee from Francoist Spain he was interned in France where he recorded life in the camp at Bram. He is considered one of the founders of Spanish photojournalism and has been called the “Spanish Robert Capa”, with a “direct, spare style” and “great skill with the miniature Leica which enabled him to follow and photograph scenes of the Civil War.”

About the Publisher
Lunwerg Editores one of the most important and prestigious publishers of art and photography books in Spain. Founded in 1979 and a part of Grupo Planeta since 2006, it has developed and specialised in the publication of large-format, high quality illustrated books in thematic areas such as art, photography, architecture, design, interior decor, travel, food, nature, science, research and maritime themes. Its publishing catalogue exceeds 1,500 titles and its photographic archive contains over a million images.