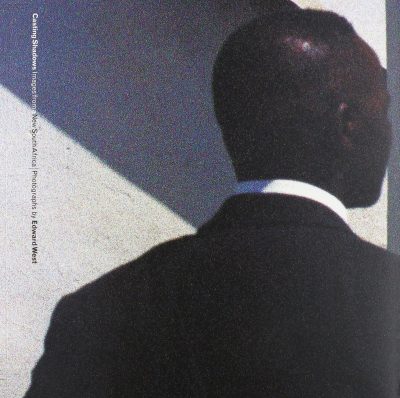 Edward West
The University of Michigan Museum of Art
English

Edward West uses the metaphorical power of shadow to foreground the shifting visibility of South Africa’s black population post apartheid. From 1997-1999, he traveled in South Africa to photograph the country’s townships, squatter camps, and locations during this historic time of transition. In focusing on the private moments of these newly empowered people within their own communities, West has created a complex, visually compelling study of the ways in which identity is inextricably linked to environment. Utilising the medium of photography in large scale colour Giclée prints, West has developed a rich visual language built on the shadow metaphor that at once moves us and grounds us.
(source: https://www.thelibraryproject.ie/products/casting-shadows-edward-west)

About the Artist
A practicing artist for over 30 years, Professor Edward West’s creative work includes photography, collage, and installation. His work has been exhibited, collected and/or published internationally in South Africa, China, Japan, and Switzerland at venues including the South African National Gallery, the Bridgestone Corporation, Tokyo, the Japan School of Contemporary Photography, and the Guangdong Museum in China. In the U.S., his exhibitions include those at the Smithsonian Institution, the Detroit Institute of Arts, the Brooklyn Museum of Art, the Museum of Contemporary Photography in Chicago, the Art Institute of Chicago, the Rose Art Museum in Boston, the Honolulu Academy of Arts, the Corcoran Gallery of American Art, and the University of Michigan Museum of Art, among others.
(source: https://stamps.umich.edu/people/edward-west)

About the Publisher
The University of Michigan’s art collection is among the oldest in the nation in university hands. In 1856, years before the great civic art museums in Detroit, Toledo, or Chicago were founded, U-M students and the general public had free access to an art gallery on campus.
umma.umich.edu
(source: https://umma.umich.edu/the-collection)