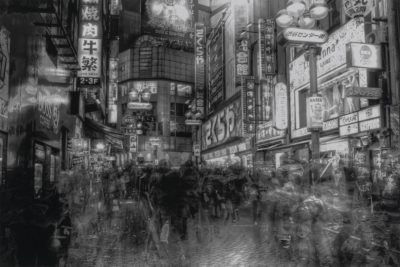 My works are about landscape of Tokyo. The sequence is called “Pax Technodelica”. This term Pax Technodelica is a mixture of Latin, English and Greek, means: “Techno-manifest peace”. In the 80’s, the key word in the cultural movement of Tokyo was Cyberpunk; the 21st Century “near-future Tokyo” as it was reviewed in movies, literature and music at that time. The chaotic vision of “Cyberpunk Tokyo” has become a fixture by the 90’s. The vision of “near-future Tokyo”of the 00’s was created three decades ago. Despite the word Cyberpunk Tokyo describes “FUTURE” it seems like a somewhat nostalgic reminiscence, and has become one of the fictitious histories of Tokyo. Now, we realize that Tokyo has not become the cyberpunk city that we have often seen in films. However, I feel the possibility of Tokyo and Japan becoming something like what we envisioned in the 80’s. I want to take “Pax Technodelica” photographs; not of now, not of the past, and not of the future, but of a mixed timeline. Digital photography along with HDRI (high dynamic range imaging) function has materialized my themes. I am taking HDRI photographs in black-and-white. HDRI is a set of techniques that provides wider dynamic range of exposures than standard digital imaging techniques. It is unnecessary to determine exposure and is possible to take at all light levels and conditions. This has allowed having views and detail to be same as that of human eye. Only digital photography can do this. It has made us possible to cross the border of human and machine like a cyborg. Photographing Tokyo suits well with a digital compact camera because it is mobile, can pan-focus, and shooting is nearly limitless. I take photographs with a digital compact camera in HDRI as though they are the vision seen through the optic nerve of Tokyo.

About the Artist
Norihisa Hosaka (Japan, b.1968) born in Japan was a writer before he began his career in photography, after the birth of his daughter. He has always had an obsessive interest in anime, manga and RPG games, which greatly influenced his desire to create and express himself to the public. Since embarking on photography, he has won several awards in photography including the Grand Prix, Esquire Japan Digital Photography Award 2007–2008, and Selected Photographer, New Directions 2012, Wall Space gallery, Debra Klomp Ching (USA).
hosakanorihisa.com

About the Publisher
Libro Arte is a publishing company based in Setagaya, Tokyo, mainly publishing photobooks by young Japanese artists.
libroarte.jp