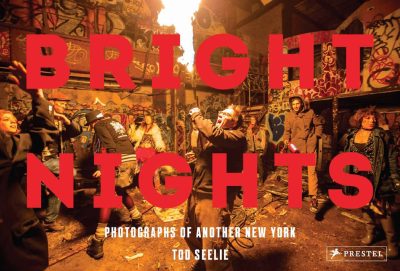 Tod Seelie loves New York, but not the version depicted in postcards. His city is an underground haven for people at society’s edges, people who come alive at night, who make music and art and noise and mess. This startlingly beautiful collection of images captures a gritty culture that belies the city’s glamorous persona. Here are punk bands and bike parades, abandoned spaces and skeezy clubs, junk-filled lots and sketchy streets. Interspersed throughout the book are texts from Seelie’s friends and fellow artists, along with an introduction by Jeff Stark, editor of the iconic alternative events e-mail list Nonsense NYC. The photographs in the book create a love poem to the city that not only doesn’t sleep—it cavorts around at 3:00 am looking for the next adventure.

About the Artist
Originally from Cleveland, Tod Seelie relocated to Brooklyn in 1997. He has photographed in 25 countries on five different continents.
todseelie.com

About the Publisher
Prestel specialises in illustrated book publishers with crafted books on all aspects of art, architecture, photography and design. From the latest pop culture and fashion to major exhibition catalogues and a comprehensive selection of fiction and non-fiction. Prestel is the publisher for art lovers, designers and those with a passion for visual culture.
prestelpublishing.penguinrandomhouse.de