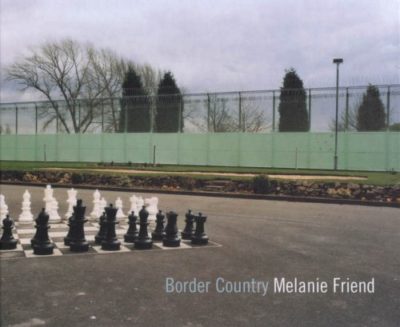 “Border Country is a rare invitation to reflect on the Immigration Removal Centre (IRC) and the paradoxical position of the immigration detainee. Detention is an increasingly normalised aspect of international immigration systems and its use has expanded within British immigration policy over recent years. As a tactic of control, detention combines multiple aims of surveillance, “protection” and deterrences; in essence, it seeks to contain and manage a population which has been designated problematic. While the ongoing growth of immigration confinement is noteworthy, it is certainly nothing new.” – Alex Hall

About the Artist
Melanie Friend has worked as a freelance photojournalist since the mid-1980s , producing photographs for magazines, newspapers, the anti-nuclear movement and other campaigns. She became a member of Format Photographers in 1986, and of Panos Pictures in 1991. In the early 1990s she combined her photography with print journalism (freelance articles for The Guardian and The Times Educational Supplement among others) and freelance radio reporting (features for BBC Radio 4 and BBC World Service).

About the Publishers
Belfast Exposed is an independent, non-profit organisation and registered charity situated in the Cathedral Quarter, Belfast. Founded in 1983 by a group of local photographers as a challenge to media representation of Belfast’s experience of conflict, their work continues to reflect a socially engaged ethos, while responding to contemporary currents in photography and politics further afield.