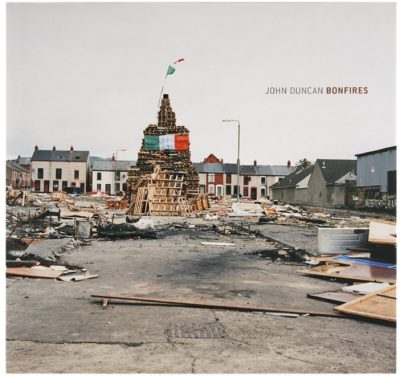 John Duncan’s Bonfires documents a long-standing tradition of bonfire building by Protestant communities in Belfast, Northern Ireland. The bonfires are built in preparation for annual 12th July celebrations, which commemorate the defeat of James Stuart at the Battle of the Boyne in 1690. The imposing bonfire structures are a powerful provocation with which Protestant identity is asserted and a sense of solidarity and continuity is re-affirmed.

Duncan’s photographs frame and measure the structures against their various social settings, revealing both a sense of Belfast’s changing urban landscape and the deep divisions that, despite political progress, still affect Northern Ireland long after the ceasefires. The bonfires have recently been challenged from a number of quarters: from within the Protestant community for damage caused to property and surrounding areas; from developers who covet the waste land they are built on; and from environmentalists who express concerns about the pollution they cause. Seen against this backdrop of competing agendas, the bonfires come to express a form of resistance, and a kind of raw ingenuity.

About the Artist
John Duncan studied Documentary Photography in Newport and Fine Art Photography at Glasgow School of Art. He has been one of the editors of Source Photographic Magazine since 1994. Duncan’s work dwells on the fact that each bonfire has a singular structure, an identity. They are sculptural and architectural oddities with many resonances through history and art, from high-rise flats to military watchtowers and gun emplacements, from the Empire State Building to the Tower of Babel.
johnduncan.info

About the Publishers
Belfast Exposed is Northern Ireland’s premier contemporary photography organisation, commissioning, publishing and showing work by artists and photographers from Northern Ireland and across the world.
belfastexposed.org

Gerhard Steidl began working as a printer and designer in 1968. From political non-fiction he then expanded into literature and selected books on art and photography. Steidl publishes German literature as well as translations from French, English and Icelandic.In 1994 Steidl launched its international photobook program. Today it includes some of the world’s most renowned photographers and artists including Joel Sternfeld, Bruce Davidson, Robert Frank, Robert Adams, Karl Lagerfeld, Lewis Baltz, Dayanita Singh, Ed Ruscha, Roni Horn and Juergen Teller, to name but a few. Every Steidl book distinguishes itself through individual design and production values. Known for his passion for paper, printer and publisher Gerhard Steidl personally selects the paper and binding materials for each title and oversees all aspects of the production process – each Steidl book literally passes through his hands. Over the decades Steidl at Düstere Strasse 4 in Göttingen has become one of the most respected printers in the international publishing world. Whether photography, art, fashion or literature, it is Steidl’s goal to realize the dreams and goals of artists and authors, and to create art in book form.
steidl.de

Photoworks champions photography for everyone. We are an international platform, global in reach, and have provided opportunities for artists and audiences since 1995. We do not have a physical venue, but our online channels are always open. Our programme brings new experiences to audiences and opens up new ways to encounter photography.
photoworks.org.uk