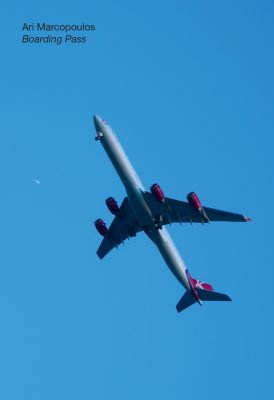 Air travel has informed Ari Marcopoulos’ life more than most. Beyond a necessary mode of transport, the passenger plane has proved something of a quiet point of obsession for the Amsterdam-born, New York-based photographer and filmmaker. Before moving to New York in 1980 – where Marcopoulos would carve out a career defined by his raw and intimate renderings of some of America’s most significant subcultural protagonists – he spent much of his childhood flying with his father, a commercial airline pilot. A conversation with Marcopoulos reveals a fascination that still burns. He recalls wandering the tarmac, studying the underside of the wings and fuselage; he remembers riding in the cockpit on an overbooked flight en-route to a Euro Cup final; he flaunts an almost encyclopedic knowledge of new, old and mothballed commercial airplanes – the Lockheed Super Constellation, Douglas DC-8 Stretch and the Boeing 737-MAX among them.
Boarding Pass, Marcopoulos’ new book for Nieves and Perimeter Editions, takes this experience of flight, and the machines that make it possible, as its defining motifs. Photographed over the last year while in transit, the characteristically intuitive, off-the-cuff images that populate this volume offer countless vantages – near and far – of airplanes on the tarmac or in flight, rerouting our gaze from the pragmatic and economic towards the poetic. Here, Marcopoulos appeals to the notion that flying – for all its supposed monotony – is still something close to a miracle.

About the Artist
A photographer and filmmaker who gravitates toward elusive subcultures, Ari Marcopoulos photographs objects and cultures that pique his interest, such as sneakers with wide laces from New York’s 1980s hip-hop scene. Creating images with anthropological and ethnographic undertones, Marcopoulos has said that most of his photographs arise “through accidents or circumstances that just happen to present themselves.” Rather than romanticise his subjects, he depicts them in a straightforward manner that reveals their beauty and anxieties. Working as an assistant to Andy Warhol after emigrating to the United States, Marcopoulos favours analog film for its slowness and for the time it asks of the viewer. Most recently, he has begun to explore high-contrast landscape photography that conjures a vague and fleeting sense of familiarity.
arimarcopoulos.net
(source: https://www.artsy.net/artwork/ari-marcopoulos-untitled-26)

About the Publisher
Nieves is an independent, one-man publishing house based in Zurich, Switzerland. Founded in 2001, by Benjamin Sommerhalder, an artist with a background in graphic design, Nieves’ focus is on publishing Artists’ Books and Zines.
nieves.ch
(source: https://www.printedmatter.org/catalog/publisher/5103)