Between Heaven And Earth: A Journey Through Christian Ethiopia 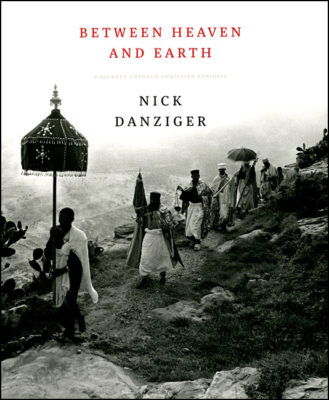 Nick Danziger was commissioned by the British Council to document the Ethiopian Tewahedo Orthodox Christian Church as they prepared to celebrate their calendar’s second millennium on 11 September 2007. The Church is at the heart of one of the oldest surviving Christian communities in the world, and is a source of wonder and curiosity to many in the West. Danziger’s extraordinary black and white photographs of the celebrations show a lost, mystical world of churches and monasteries perched on remote cliffs and movingly reflect the faith and tenacity of the people, young and old. The photographs are accompanied by an essay titled the drum And The cross by the renowned traveler and writer on Ethiopia, Philip Marsden. Published on the occasion of the exhibition at the Royal Geographical Society, London.

About the Artist
Nick Danziger was born in London. Nick’s initial ambition was to be an artist, and he later attended The Chelsea School of Art, where he gained an MA in Fine Art and was soon represented by the Robert Fraser Gallery. In 1982, he applied for and was awarded a Winston Churchill Memorial Fellowship, and used it to follow ancient trade routes, travelling on foot or by traditional local transport from Turkey to China, documenting his adventures in diaries. The diaries and photographs formed his first book, the best selling Danziger’s Travels in 1987, and a second book, Danziger’s Adventures, followed in 1993. His third book, published in 1996, Danziger’s Britain, was a social and political commentary on the state of Britain

About the Publisher
The British Council builds connections, understanding and trust between people in the UK and other countries through arts and culture, education and the English language.