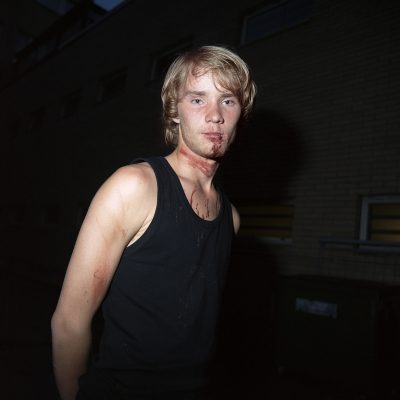 Within my Battered series, I have focused my camera on the people who are victims of interpersonal direct violence that takes place in public spaces. In these photographs, I have been mainly concentrating on the physical marks that an assault leaves to the body. I have also photographed fights as they appear and the places where fights have taken place.

Batteries and street fights are every night activities during the weekends in Finland. People have a strong tendency of getting rather intoxicated during the partying and once drunk, people are released from their inhibitions. Aggression turns into physical acts, to direct violence. There is a social awareness on this topic in Finland, the issue is recognized and it is considered a severe social problem. But the discussion has mainly literal dimensions, it appears in news headlines and it is discussed in seminars. There are no images from these happenings. By photographing assaults and batteries, I wish to show the real faces of street violence in Finland. In contrast to the stereotypic portrayals of male heroicism and the worn-out attempts at shocking people I am interested in addressing the utmost banality inherent in violence. What I find more unsettling than any single representation of physical injuries is the everyday nature of street violence and the laissez-faire attitude towards it in the Finnish society. I worked with the topic for two years, spending many of my weekend nights in the centre of the town called Turku (in South West Finland) looking for fights and battered people. Also I have worked in cooperation with the Turku Police Department, travelling with them in their cars.

Battered is based on traditional social documentarypractice, and visually images are related to crime scene photography and police pictures. Historical references (Jacob Riis, WeeGee, Enrique Metinides among others) have played on important part in the creation of this project.

At the core of Pälviranta’s artistic curiosity are issues relating to violence and masculinity, and often in his works he bridges these two themes. What is noteworthy is that he understands both of these concepts through their wide definitions. Like Slavoj Žižek, Pälviranta sees violence as a diverse practice: it can be seen as subjective and objective, and it can take both symbolic and systemic forms. Connected to this, his comprehension of masculinity is also layered: masculinity can be seen as culturally encoded and performed and renewed in commonplace practices. These points of departure mean that violence and masculinity alike can be observed and studied as both concrete and structural phenomena, and from analytical and/or subjective perspectives.
harripalviranta.com