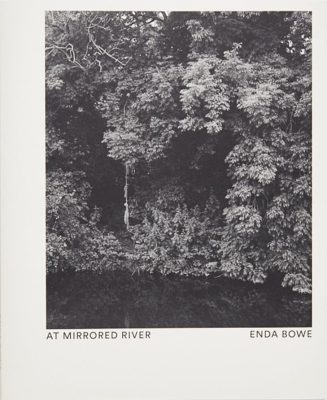 At Mirrored River was inspired by the Gaelic word ‘teannalach’ which means awareness. In particular, it is awareness of that which is intangible and hushed; of being aware of the quietness and presence of people, places and nature. With this in mind, Bowe sought to capture the teannalach of stories and dreams within a singular town.

The project is entirely made in an ordinary small industrial town. Bowe’s personal challenge was to find the light and the beauty in the ordinary, the hope and the optimism. As the project unfolded, it became less about the location of the project and more about mapping the feelings contained within the town. It is about the awareness of who we are, the questions we ask and the dreams we project.
(source: https://visualartists.ie/events/at-mirrored-river-enda-bowe-at-the-library-project-dublin/#:~:text=At%20Mirrored%20River%20was%20inspired,of%20people%2C%20places%20and%20nature.)

About the Artist
Enda Bowe’s work is concerned with story telling and the search of light and beauty in the ordinary. Influences in his work include writer John McGahern, poet John Glenday, and directors Lynne Ramsey, Eve Arnold and Lenny Abrahamson. Enda’s work has been exhibited in galleries and museums including the V&A , London, The Douglas Hyde Gallery, Dublin, the National Portrait Gallery, London, Fotomuseum, Winterthur, and The Gallery of Photography, Dublin.
endabowe.com

About the Publisher
There is no information available about the publisher.