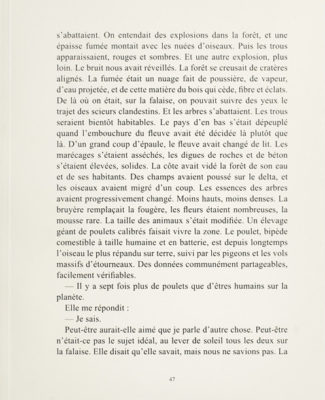 “In less than 200 years man has altered life on earth forever. The Anthropocene is the new geological age, an age in which the human species has become the prevailing geophysical force dominating all other natural forces that have hitherto impacted upon the earth.

In geological time (4.5 billion years) 200 years represent a few seconds in the lifespan of a human being. A few decisive seconds. This staggering acceleration in our planet’s evolution suggests that we have passed the tipping point, that humanity’s end has moved suddenly closer, that our biological survival is at stake. For man, nature has always been a kind of creed, God’s shadow on earth. The fact that humanity has become the dominant force for the planet augurs the death of this idea of nature and, paradoxically, dissolves the frontier that has hitherto separated us from the natural world. Ours is now a world rid at last of the very idea of nature; a purely artificial world, innocent, fragile and hazardous. Eden is right here and now. To accept this idea is to accept a kind of serene jubilation before the enigmatic beauty of a world in decay.’

About the artist
Nicolas Guiraud is a photographer and artist. After studying Economics and Philosophy in Paris, he started photography collaborating with Magnum Photos agency where he became creative director between 2003 and 2007. His work deals with the idea of Anthropocene and frontiers at large. His approach combines documentary photography with speculative utopias. He also works on assignment for various Magazines and institutions: Financial Time Magazine, M / Le Monde, Vanity Fair, Elle, Libération, Zadig, Atlantico, La republca, Le Louvre