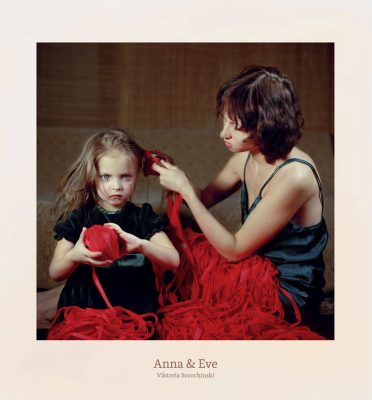 Viktorai Sorochinski’s great narrative Anna & Eve is a journey into different worlds — children’s fantasy world and the real world of adults. Worlds that attract and repel each other, overlap and drift apart again. The borders are vague, adults carry the memory of their own childhood, children feel that they will be grown-ups themselves one day. At this fragile interface Viktoria Sorochinski’s fabulous series about the young mother Anna and her little daughter Eve takes place. Inspired by her own childhood memories of Russian fairy tales she describes over the course of 7 years the enigmatic relationship between mother and daughter with magical fantasy scenes that don’t reveal, who holds the power and control between the two, and who is still learning the essence of being a human in this world.

At the age of 8 years Eve herself has written the short story ›My Planet‹, that together with a dream-like sequence of images opens the book. In her further commentary about children and adults she says: ›Adults just think that they don’t need fairy tales. Having read this book, we know better.

About the Artist
Viktoria Sorochinski was born in Ukraine -1979. She left the USSR with her parents in 1990. After living in Israel, she continued her studies of Fine Arts in Montreal, then in New York City, where she acquired her Masters of Fine Arts in 2008. She is currently living and working in Berlin.

About the Publisher
Peperoni Books is a Berlin based publisher, specialising in photobooks.
peperoni-books.de