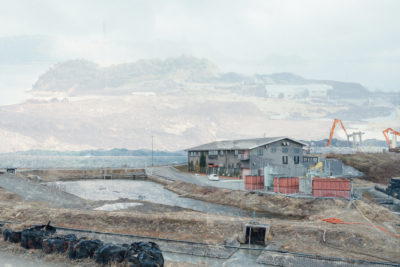 This 2019 photobook is dedicated to a story about a rural island located in the Seto Inland Sea of Japan, which is called Teshima. A huge volume of industrial waste (mainly automotive shredder residues) had been illegally dumped between 1975 and 1980s in Teshima. The beautiful beach was filled with garbage from unauthorized dumping, which was buried in the sand or piled up in heaps and burnt, causing black smoke to rise here and there. After a long legal battle, the issue was finally settled and the cleaning of the island started in 2000, and since then about 918,000 tons of industrial waste had been transferred to nearby Naoshima Island for intermediate processing. The transport was completed in March 2017, followed by the completion of intermediate processing in June 2017. Based on this background, Hayashida’s project consists of two elements. One is photographs of the incident spots taken after July 2017. The other is archival photographs the island residents have taken in 1980-2000s. The archival photographs are transparent into the current landscape. Hayashida is of a generation who does not know the incident directly. Teshima is now well known for “Island of Arts” as long as Naoshima. More and more tourits are coming from all over the world and Japan to enjoy a number of the art sites, food, and nature in the island. The Teshima incident is fading with time. Therefore, Hayashida is trying to indicate what has happened along with the economic growth, in this beautiful island of Japan.

About the Artist
Maki Hayashida (b.1984, Japan) is a photographer and visual artist based in Tokyo. Her long background in marketing and communications in the Japanese advertising industry informs her photographic practice, which questions human behavior in a consumer society. She also investigates how visual material can function as a multilayered narrative to perceive the present through the past.
makihayashida.com