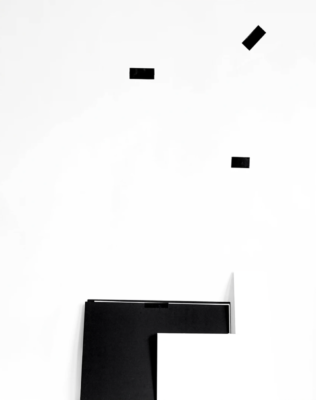 After the Image is a series of photographs that reveals the staging and setup that takes place behind the scenes of photography sets. They touch on the aura of the objects, never directly displaying them images. Thus the subjects are invisible, off the frame, forcing the viewer to mentally reconstruct the images basing solely off the caption for reference. Before their eyes: an empty set at the moment of exhibition and the firing of the shutter. This series revels the elements and setup that will be sacrificed, erased, for the creation of the final photograph.

About the Artist
Marina Gadonneix was born in 1977 in Paris, where she lives and works. She is a graduate of the École nationale supérieure de la photographie d’Arles, Marina Gadonneix received the HSBC Photography award in 2006 and the Dummy Book award from the Luma Foundation and the Rencontres d’Arles in 2018. Her work has been exhibited in many institutions in Europe and the United States.

About the Publisher
RVB Books is both an independent publisher dedicated to designing and printing unique fine arts books and a gallery featuring exhibitions on new editorial practices. RVB Books is based in Paris.