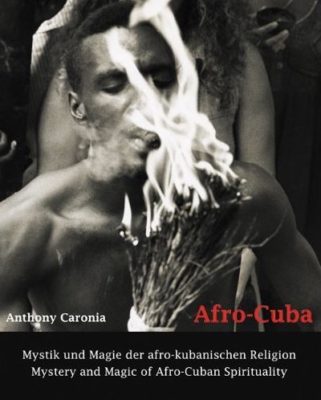 A four year-long research preceded this black-and-white photographic documentary into the mysterious world of Afro-Cuban religion. Anthony Caronias images firmly express the contrasts and beauty of the mythical world of the Cuban temple-homes, humble abodes with an area reserved for the worship of the divine, natural forces in the shape of orishas, spirits, ancestors or saints. Throughout his images we time and again perceive the density of deeply rooted rituals, the strength of ceremonies that are repeated generation after generation and that evoke visions that take us back to the very forging of the Cuban identity. The purpose of this photo project is to carefully report on a complex religion, its different ceremonies and rich folklore; a window into a magical world, a world where African spirits manifest their presence in everyday Cuban life. A historical introduction by Ania Rodríguez Alonso and descriptions of the religious rites and beliefs accompany the photos.

About the Artist
Anthony Caronia (b. 1968) from Rome, Italy has lived in various countries such as Malta, Saudi Arabia, Qatar, U.S.A. , Cuba, Mexico, and ultimately now resides in Brasil. His passion for photography came to be in the deserts of Qatar, documenting the modernization of the beduins.
Since then, he has travelled extensively documenting various cultures and ways of life.

About the Authors
Tzvetan Todorov is a Bulgarian-French historian, philosopher, structuralist literary critic, sociologist and essayist. He is the author of many books and essays, which have had a significant influence in anthropology, sociology, semiotics, literary theory, thought history and culture theory.

Ania Rodriguez Alonso, born in 1977 in Havana, studied Art History at the University of Havana and is currently a curator and an art critic. Since 2006 she has curated various exhibits on Cuban and European art in Brazil.

About the Publisher:
Benteli Verlag was founded in 1899 and is based in Zurich, Switzerland.