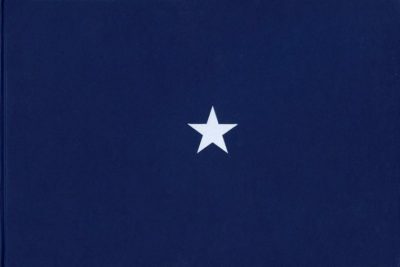 A New American Picture depicts American street scenes, located using the internet platform Google Street View. Over a four-year period, Rickard took advantage of Google’s massive image archive to virtually explore the roads of America looking for forgotten, economically devastated, and largely abandoned places. After locating and composing scenes of urban and rural decay, Rickard re-photographed the images on his computer screen with a tripod-mounted camera, freeing the image from its technological origins and re-presenting them on a new documentary plane. The low-resolution images that Rickard favours have a dissolved, painterly effect, and are occasionally populated with figures who acknowledge the camera, but whose faces are blurred, masking their identity. The photographs are thus imbued with an added surrealism and anonymity, which reinforces the isolation of the subjects and emphasises the effects of an increasingly stratified American social structure. Rickard’s work evokes a connection to the tradition of American street photography, with knowing references to Walker Evans, Robert Frank and Stephen Shore. He both follows and advances that tradition, with a documentary strategy that acknowledges an increasingly technological world—a world in which a camera mounted on a moving car can generate evidence of the people and places it is leaving behind. Collectively, these images present a photographic portrait of the socially disenfranchised and economically powerless, those living an inversion of the American Dream.

About the Artist
Doug Rickard (b. 1968, d. 2022) was an American photographer. He drew from his previous studies of American History in research for many of his projects and photobooks. He was founder and publisher of the website on contemporary photography, American Suburb X, which published some of his collection of found photographs.
dougrickard.com

About the Publisher
White Press photo artist books design follows photography. White Press photobooks are made for photographers to expose their work to an even greater audience. Photography and print: Two media determined to duplication.
en.white-press.org