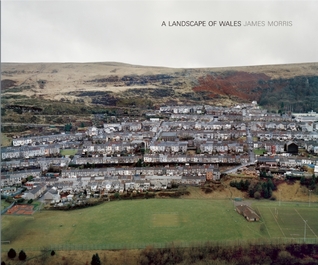 A Landscape of Wales is a photobook which takes an expansive look at the contemporary Welsh landscape. Morris challenges the tourist clichés and looks at the impact of human presence and the layers of history in the landscape. He reflects upon issues of identity, exploitation, tourism and regeneration; it is a land of beauty and of hardship where – in this post industrial, post rural economy – Tesco and tourism are now the great employers.

These are the contrasting realities of the Welsh landscape – that seen by the many visitors and that experienced by most inhabitants. Morris moves between tourist hot spots and the terraces and back streets where the majority of people live. The latter are often hard bitten unpretty places, often built for reasons that are no longer relevant. No longer the world’s largest producer of iron, coal, copper or slate, these are places that have lost their historic and heroic status, sometimes even their raison d’etre. Regeneration is taking place, but it is taking its time. By contrast the tourist landscape is one of pleasure seeking and escape – this is the Wales that visitors are sold and want to see. But in a small country, this selling of culture for the tourist pound has complex consequences that add to the other complexities that have shaped so much of the landscape.

About the Artist
James Morris is an award-winning photographer of landscape and the built environment. Based in the Wales, his work is in many private and public collections including The British Council; Museum of African Art, New York; Princeton University; Victoria and Albert Museum, London; the National Library of Wales.
jamesmorris.info

About the Contributor
Brought up in Manchester, Jim Perrin is an award-winning writer of Welsh descent. His books include River Map (Gomer, 2001), The Villain: the life of Don Whillans (Hutchinson, 2005) and Travels with the Flea (In Pinn, 2003). The Climbing Essays won the mountaineering Literature Award at the 2006 Banff Mountain Festival. He now lives in the Pyrenees.

About the Publisher
Dewi Lewis Publishing is a partnership owned and run by Caroline Warhurst and Dewi Lewis. Founded in 1994, its photography list has an international reputation and includes books by leading British and international photographers such as William Klein, Martin Parr, Simon Norfolk, Fay Godwin, Tom Wood, Sergio Larrain, Frank Horvat, John Blakemore, Paolo Pelegrin and Bruce Gilden. The aim of the company is to bring to the attention of a wider public, accessible but challenging contemporary photography by both established and lesser known practitioners. The company has a worldwide distribution network and is recognised as one of the leading photographic publishers in the world. It publishes around 20 new titles each year.  Dewi Lewis Publishing also works in close collaboration with a number of European publishers and is a founding member of The European Publishers Award for Photography, which is now beginning its 22nd year. In 2014 Dewi Lewis Publishing received the PhotoEspana’s prize for Outstanding Publishing House of the Year.
dewilewis.com