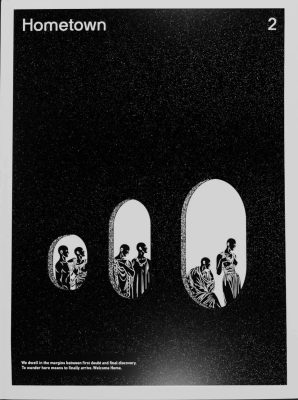 This Is Our Identity
Episode 2
Hometown Journal
Self-Published
English

This Is Our Identity, Episode 2 by Hometown Journal is available for viewing on Vimeo.

When we finished the first episode of this magazine we realised that there was a certain gap. Hometown has always been about places, memories, and stories, but recently those were missing something very essential. Since most of us are still locked down worldwide, we were confronted with a desire to reach out to other human beings again. To find out about our identity and what it means to be alive. That’s what episode 2 is about. It tells a journey showing the art of 16 human beings from 9 countries. It displays our process, our learning while exposing the different aspects of our identity. Again we are including 7 different types of paper and 14 printing techniques.

About The Series
Two human beings, one Hometown. Raised surrounded by the same friends, teachers, and cows, our journey began in a small village nobody has ever heard of and currently locates us between Amsterdam and Berlin. What started as just two friends from high school who made some films became a shared interest in visual storytelling. Soon a new project started, ignited by the idea of combining personal interests with the medium film. We founded Hometown. Those earlier videos began to become elevated documentaries that went off to win film festivals around the globe and gather two Vimeo Staff Picks. At the same time, we also focused on a new world. Advertising.

About the Artists
Alex Schuchmann is a German cinematographer, editor, and publisher based between Amsterdam and Berlin. His passion for photography and storytelling began to flourish already in his teenage years when he was portraying his friends and people closest to him. Shooting and developing black and white 16mm film in Italy during his film studies sparked his enthusiasm and love for film.
In 2017 he teamed up with director Jan Eric Huehn to create documentaries, music videos, and commercials under the acronym “Hometown”. They are connected by their origin, friendship, and a shared passion to make stories become film. Their idea of no longer separate fiction and reality but to bring them together as one makes their style unique. They believe that each aspect of film should be treated equally whether it’s the story, the image or the music. Together they have found their voice – being able to create an environment making reality feel cinematic.
Today Alex is creating films both as a freelance DP and as a part of the duo “Hometown”, always looking for new challenges, creative souls and innovative ways of storytelling. His desire to discover the world through the viewfinder is his greatest motivation.
alexschuchmann.de
(source https://www.alexschuchmann.de/ueber)

Growing up Jan Eric Hühn was under the influence of a self-employed father and a media-designing mother, the current vocational training must have been anchored in my DNA. Despite their young age, they have already been able to accumulate more than 4 years of professional experience. They have always wanted to create things. I think with a healthy degree of carelessness, I constantly throw myself into new tasks. I love the challenge and have always been able to master it.
(source https://de.linkedin.com/in/janerich%C3%BChn)