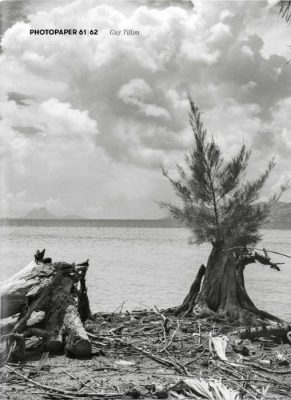 The boundaries of the way we see things seem to be sometimes to me so restrictive and I was interested in French Polynesia to see where those boundaries for me are. When I arrived there I bought a bunch of postcards and put them up and thought ok well, what can I add to this? How can my pictures be different. There were palm-fringed bays, volcanic islands rising out of the sea—what could I bring that would make me pause, see it anew, make the picture a place of contemplation? So this was a voyage of introspection really—how do you find that place of meditation, how do you find that neutrality, where do you look to create a kind of balance. Is it some sort of composition? That preoccupied me for almost a year. Not that I went home and pondered the meaning of existence, it was a way to spend the days, walking with a camera in these places. I suppose that in the end my solution was to try and, I know this sounds trite but, let the place speak through me, as it were, speak for itself in other words. To my mind this meant looking for some kind of equality of the elements that I was looking at through the camera—the sea, the mountain, the palms. Not to trade in cliches, or to say too emphatically what was photographed. I’m not sure to what extent I’ve been successful, its hard to say. I remember one day I thought I’d got it, I felt like I was walking on air. I kept all the images on a drive and you can see there’s this moment when I start photographing everything—the side of the road, a flower, a mountain, there seems to be suddenly no sense or sequence to what I’m doing. There are dozens of photos of the side of the road, sometimes with a telephone pole importantly sidelined, that had felt so meaningful to me, then. It’s not meaningful to me now, but so what?
(source: https://photopaper.world/portfolio-item/61-62-guy-tillim/)

About the Artist
Guy Tillim was born in Johannesburg in 1962 and lives in Vermaaklikheid in South Africa. He started photographing professionally in 1986, working with the Afrapix collective until 1990. His work as a freelance photographer in South Africa for the local and foreign media included positions with Reuters between 1986 and 1988, and Agence France Presse in 1993 and 1994. Tillim has received awards for his work, including the 2004 Daimler-Chrysler Award for South African photography; the Leica Oskar Barnack Award in 2005; the first Robert Gardner Fellowship in Photography from the Peabody Museum at Harvard University in 2006; the Quai Branly Photography Residencies in 2015, and the Henri Cartier-Bresson Award in 2017. His work was included in Documenta 12 in 2007, the São Paulo Biennial in 2006, and the touring exhibition Africa Remix (2004-2007), presented at the Centre Pompidou in 2004.
(source: https://photopaper.world/portfolio-item/61-62-guy-tillim/)