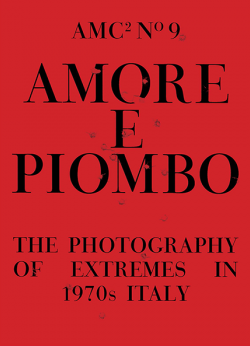 Published to coincide with the exhibition Amore e Piombo: The Photography of Extremes in 1970s Italy at the 2014 Brighton Photo Biennial, Issue 9 of AMC2 looks at the tumultuous era of Italy’s Years of Lead – a period when bombings, kidnappings and assassinations became the standard currency of Italian politics. The catalyst for this era of terror was the growing strength of the Italian Communist Party as an electoral force – a development opposed within Italy by the extremes on both left and right, and externally by the USA and the Soviet Union. At the dark heart of things were the murky manoeuvrings of clandestine groups within NATO, the CIA, the Italian secret services and the P2 Masonic Lodge. Outrages perpetrated by one political group were presented as the acts of another, giving rise to the Italian concept of dietrologia – the idea that surface explanations are rarely the real ones.

The press photographs collated for Amore e Piombo from the archives of Rome-based agency Team Editorial Services reflect the manifold aspects of the period, as the photographers oscillate between pursuing film stars at play and capturing the violence on the streets against a backdrop of industrial unrest and a sexual revolution embracing free love, divorce, abortion, feminism, and gay rights. Far from offering answers or uncovering definitive truths, the photographs reveal only tantalising fragments of evidence about this most turbulent and tangled decade, while the true puppet-masters and string-pullers remain just out of frame.
(source: https://archiveofmodernconflict.com/amc2-journal-issue-9/)

About the Magazine
AMC2 Journal is a magazine run by The Archive of Modern Conflict. Issues are published intermittently, each printed in a different format. The magazine was first issued in 2011 and most recently in 2018.
(source: https://archiveofmodernconflict.com/about-us/)