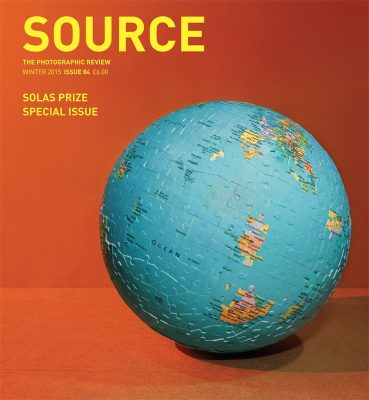 This special issue includes the work of the winners of the Solas Photography Prize: Michel Le Belhomme, Dara McGrath and Mervyn Arthur. We are publishing their work along with three specially commissioned essays. We are also announcing the winners of the Solas Ireland award: Ciarán Óg Arnold, Enda Bowe, Eamonn Doyle, Emer Gillespie, Shane Lynam, Dara McGrath and Yvette Monahan. The Prize is a partnership between Source and the Gallery of Photography and work from all the winners will be exhibited there from 2 December to 10 January. The Solas Prize is also partnering with Fotohof and the Irish winners’ work will be exhibited in Salzburg in April 2016.

The standard of submissions to the prize was high and we would like to thank all the photographers who took time to make a submission. The work of the 28 shortlisted photographers can be seen at www.solas.com. We would also like to thank the international judges who worked with us on the prize: Natasha Egan of the Museum of Contemporary Photography, Frits Gierstberg of the Nederlands Fotomuseum, Herman Seidl from Fotohof and Tanya Kiang of the Gallery of Photography.

Writing about the work of Michel Le Belhomme, Siún Hanrahan says it is ‘an exploration of the assumptions that structure our ideas on landscape and representation’. The pictures are all (broadly speaking) landscapes but that includes collages, folded maps and even 3D puzzles. The work is called The Two Labyrinths which might suggest either a deceptively simple game or a deadly variety of trap.

The starting point and title for Dara McGrath’s work comes from a Ministry of Defence report Project Cleansweep, which was set up to provide assurance that residual contamination by chemical warfare agents in the UK does not pose a risk to human health or the environment. Although the MOD reported no remaining risk at the 14 sites they examined, other environmental experts remain sceptical. McGrath’s work scrutinises the post- militarised environment to consider what we can and cannot see.

Mervyn Arthur is interested in the photographic process and the relationship of real objects to images. Although on first impression these pictures have an abstract perfectionism on closer inspection they are anchored to reality by the scuffs, scratches and imperfections visible in the surfaces. Arthur plays with formal and external markers of reality in this struggle with realism.