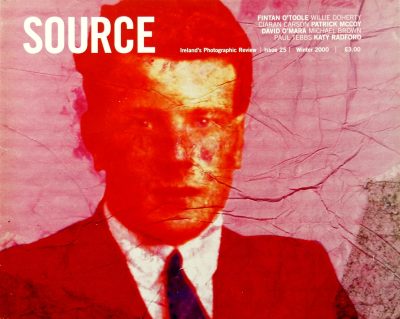 Willie Doherty has recently completed a residency at the DAAD museum in Berlin. This resulted in a new set of work about the city. Returning to black and white these night time photographs are suggestive of Berlin prior to the fall of the Wall and an atmosphere of secrecy and surveillance. This is a continuation of his previous concerns familiar from his work produced in Northern Ireland.

‘Found Photography’, particularly that produced by the family is the source for the work of Patrick McCoy and David O’Mara. Paul Tebbs examines the photographs contained in family albums and discusses contemporary artists who incorporate them in their work. He discusses our familiarity with, and simultaneous exclusion from, the images families produce.

Patrick McCoys ‘Album’ is made up of photographs found on the streets of Belfast. Ciaran Carson, a poet who has frequently written about the city reflects upon some of the images from the album. An archive of Patrick McCoy’s work is currently being established at the National Museum of Photography, Film and Television in Bradford.

Fintan O’Toole has long been interested in the way Ireland has been represented. He has been looking at contemporary photographic books on Ireland produced for the international market and has discovered that while Ireland itself has changed in recent years, a fantastic version of the country is still real to the purchasers of these books.

The power to represent people through advertising and public communication is discussed by Michael Brown and Katy Radford. Based on his own experience working with young people in Kathmandu Michael Brown explores how communication can stimulate a process of change. Meanwhile in Ireland the company Advanced Cosmetic Surgery, through a widespread advertising campaign, has been presenting us with the opportunity to refashion our bodies. Katy Radford and Orla Fitzpatrick have interviewed the people responsible for these advertisments to find out how they sought to make this attractive.