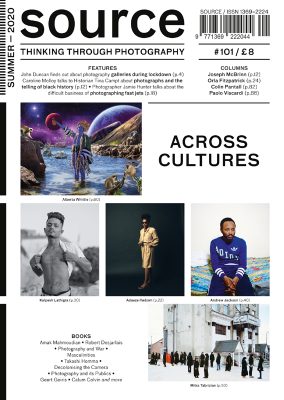 Culture is a mixture of inheritances. These can be starkly contrasting, defined by historical events or geographical separation but can nevertheless all be contained in one person’s experience. The work in this issue is characterised by the spans of time and space that it encompasses. The historian Tina Campt, in an interview about her work, talks about how she came to photography as part of her research into the lives of black Germans under the Nazi regime. She discovered that photographs gave her a way of understanding a history that hadn’t been written about, and that they spoke eloquently about lives that didn’t fit in the grand narrative of the period. She has continued to write about photography and says we need to ‘listen’ to images.

Adaeze Ihebom’s series Igbo Women draws on the novel Things Fall Apart by Chinua Achebe. Set in a fictional village called Umuofia, situated in the eastern region of Nigeria, it follows the life of Okwonkwo, an Igbo man. Taking Achebe’s novel as a point of departure, in a series of self portraits, Ihebom imagines the future generations of the Okwonkwo lineage. Writing about the work, Will Rea discusses how Ihebom “reconfigures a founding moment in Nigerian modernism and places female identity back at its core.”

The starting point for Kalpesh Lathigra’s new work was an assignment for De Zeit newspaper to take a road trip between Glasgow and Calais two weeks before the Brexit referendum. It left him with questions about his place in the United Kingdom. Born in Forest Gate to parents who had migrated to east Africa from India, Lathigra describes having “a melancholic longing for an imagined place where I belong”. To explore this he travelled to Mumbai to make photographs in a city where he might have grown up, had his family history been different.

Home and belonging are also concerns in the work of Andrew Jackson. His projects From a Small Island and From Whence We Came started when his father became ill and Jackson realised that the stories of his parents’ generation were in danger of being lost. The work combines images of his parents at home in England and of Jamaica where they had grown up. The project became a “documentation of his dislocation from the space” as he realised the places his parents remembered often no longer existed. In these images Jackson presents “an industrial and abandoned Jamaica, far from the tropical paradise many would imagine”.

The question of how you represent the experience of people across cultures has been richly explored by Mitra Tabrizian. In her retrospective interview with Roberta McGrath they talk about her early documentary work in Tehran in the 1980s, her interest in the underrepresented and her focus on quotidian stories that allude to bigger issues. Her most recent projects have seen her reworking of the documentary genre in photographs in which volunteers are asked to “play themselves”. In Leicestershire this involves ex-factory workers, many of whom had been encouraged to migrate for jobs that have since disappeared and who helped build the city in which they now live. In Border the images and stories show the resilience and “undefeated-ness” of people who have suffered the dislocation of exile.

As well as looking backwards the work in this issue also looks forward. The artist Alberta Whittle is interested in activating new ways of “rethinking relationships to the past, present and future”. Writing about the work, Ed Pavlić notes how Whittle uses photo collage to force “the veiled roles of violence and captivity in Caribbean histories into view”. The work draws on tidalectics – a term coined by the Barbadian poet and academic Kamau Brathwaite with Caribbean histories and cultures in mind – as a process in which history and the present, the individual and colliding communal affiliations, wash together in recurring rhythms.