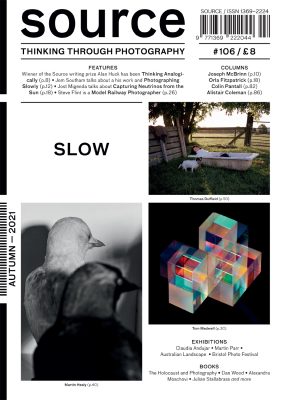 Time is made manifest in photographs in different ways. We are familiar with the frozen movement of a high speed exposure. Less familiar are images that record slow processes or that simply take a long time to register as in geology or astronomy. Jem Southam talks about his work, which has often been slow to make, using cumbersome equipment, and photographing apparently static subject matter like ponds and cliff faces. Yet his patient and precise method, as well as reflecting his temperament, draws our attention to the small details of incremental change.

An extreme example of slow image making would be the 5,200 day exposure to record an image of the sun made by the Super- Kamiokande neutrino detector in Japan. Jost Migenda explains how this detector operates, what neutrinos are and how the most violent and extreme events in the galaxy give rise to the faintest, almost imperceptible signals.

Tom Medwell considers his work as being like a sculptural practice “building structures out of time that can only exist on the negative”. The production of his work can be extremely painstaking in one case involving 512 exposures with a mistake on any one of them ruining the entire piece. The multiple exposures provide “a framework to present time in fragments within an image, presenting both a sequence of events, and also a sense of fading, time having passed, time concretised into a solid object whose indistinct margins nevertheless produce a clear overall form”. A recent series was made in a school near his home during the first lockdown. It is an exploration of memory or at least, half-remembered moments. The structures represent his “own mental state within the locations, and play with the idea that childhood memories are both quite solid but also often not fixed in time”.

Martin Healy’s project Field Notes began in 2018 and has come out of his long term interest in J.A. Baker’s book The Peregrine and its descriptions of tracking birds of prey through “obsessive traversing of the landscape in repetitive patterns”. Field Notes is an attempt to create a visual language to describe the thoughts, ideas and images that occur while Healy undertakes his own walks. In his photographs of living birds they are seen deep back in the landscape “It is this zone of almost-vanishing, the point of being lost”.

Thomas Duffield’s new work Poppy Promises is made around his father’s struggle with heroin addiction. It follows on from his first project, The Whole House is Shaking, which addressed the initially concealed addiction within the family. After years of little contact with his father the work was part of a slow re-connection. When discussing the new work Duffield emphasises the “difficulty of tackling his intimate subject matter head-on, and the long process of approaching it laterally, from allusive angles”.