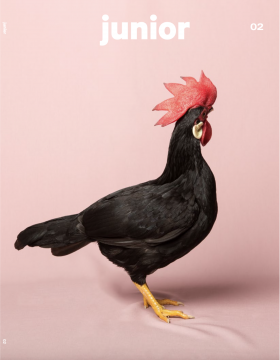 Junior Magazine is a photographic journal that provides a platform for emerging talent in Irish documentary photography. It seeks to foster a new photographic community and shine a spotlight on outstanding work that is too often overlooked. In showcasing the work of Dublin photographers, the magazine also serves as a de-facto love-letter to the city they call home. This issue features the work of six photographers each of whom provide a totally unique perspective on the world around them. The theme of the second issue is ‘freedom’. Within these pages are presented features from some of Ireland’s most promising photographers. Additionally, photographs are combined with the written word, as some of Ireland’s emerging literary talent respond to images from Clare Lyons, Darragh Soden and more. The magazine is divided into three different sections: Projects, Stories and Poems.

About the Creators
George Voronov is a recent graduate of the MFA programme at the Belfast School of Art, Ulster University where he studied under Ken Grant, Donovan Wylie, and Haley Morris Cafiero. While at Belfast, George began developing ‘We Became Everything’ a long-term photography project looking at young people’s experience of spirituality in contemporary Ireland. He splits time between editorial and commercial commissions as well as his personal artistic practice.
georgevoronov.com

Ellius Grace is a portrait and fashion photographer from Dublin, Ireland. He received a degree in graphic design from the National College of Art and Design in 2015 and now works editorially and commercially between London and Dublin. He is co-founder and editor of Junior Press, a publishing initiative and magazine working to showcase young talent in Irish documentary photography.
elliusgrace.com

About the Publisher
Junior Press is based in Dublin, Ireland and run by Ellius Grace and George Voronov. The aim of Junior Press is to showcase new photographic talent in Ireland, particularly young up-and-coming documentary photographers.
Publisher’s Facebook