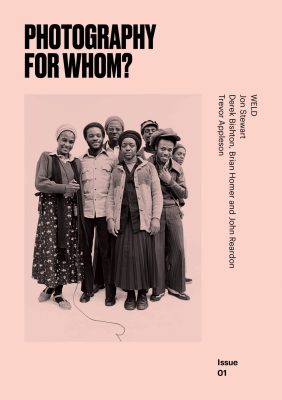 Photography For Whom?
Issue 01
Edited by Anthony Luvera
Self-Published
English

Issue 01 of Photography For Whom? features an excerpt from Community Media – Community communication in the UK: video, local TV, film and photography by Heinz Nigg and Graham Wade, published in 1980. The selection is from a chapter written by Nigg, titled ‘The WELD Photography Project’, in which he focuses on the work of Jon Stewart shortly after he began working at the Westminster Endeavour for Liason and Development (WELD) in Birmingham. In 1976 WELD was the first organisation in the UK to formally advertise a job for a ‘community photographer’. The inaugural creation of this job by an organisation marks the beginning of what is now an established and common professional pathway across the cultural sector. The founding of this post and Stewart’s appointment is a significant moment in both the history of community photography and community education. After Stewart resigned, the community photography work at WELD was taken over by Derek Bishton, Brian Homer and John Reardon.

As a counterpart to Nigg’s writing about Jon Stewart’s time at WELD, Kieran Connell has been invited to consider Handsworth Self-Portrait by Bishton, Homer and Reardon, alongside the socially engaged work by Trevor Appelson, Portable Studio, created in Birmingham in 2015. In his essay, ‘In the Hands of Many? The Politics of Community Photography in Birmingham’, written specially for Photography For Whom?, Connell opens up a number of incisive questions and observations about the wider cultural and historical contexts of community photography and socially engaged practices in relation to themes such as the cultural condition of ‘community’, the politics of representation, and the ethics of collaboration.

In ‘Then With Now’, Anthony Luvera considers the emergence of community photography out of the radical politics of activist groups, grassroots organisations, and photography collectives in the 1970s and 1980s. This dynamic field of practice is under-represented or missing altogether in historical accounts of the photographic medium, despite the growth of collaborative, participatory and community photography practices in recent years. Luvera sets out the intentions behind Photography For Whom? as being a project which seek.
(source: https://photographyforwhom.com/product/photography-for-whom-issue-1)

About the Series
Photography For Whom? is a new periodical focused on socially-engaged photography. Published biannually, Photography For Whom? seeks to shine light on significant yet overlooked work of the past and to generate debate about contemporary practice, by bringing writing and practice from the community photography movement back into circulation from sources which are out of print, largely unknown or difficult to access. Each issue presents a historic text alongside a newly commissioned piece of writing to foster critical consideration of socially-engaged photography today.
(source: https://photographyforwhom.com/about)