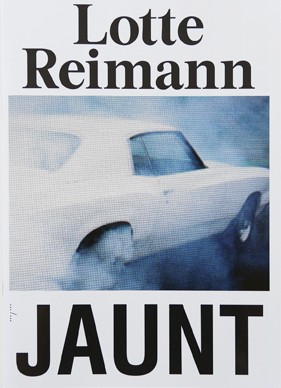 Lotte Reimann’s series about steel, glass, plastic, oil, and dirt together embodied in the automobile was inspired by amateur photographers; specifically, the nude (self)portraits taken by a couple and discovered by Reimann on a picture sharing website. With this material as a starting point, she added images from other random sources on the Internet and then re-photographed all of them from her computer screen. Consequently, the photos are treated as raw material, an eroticised pixilation of muscle cars, burning rubber, high heels, off-roading, tremendous speed, and gas pedals, which weaves a narrative of recklessness, excitement, and arousal.
(Source https://www.printedmatter.org/catalog/41323/)

About the Artist
Lotte Reimann studied fine arts with a favour for photographic images. Her work gives insight into personal worlds, leaving room for her own artist perspective. Found and own images, texts, and sounds connect easily into open story lines. These fragmentary narratives touch on existing power structures, e.g. between author and subject. The ‘erotic’ body in ‘modern’ society, and the archive as a controversial tool for both understanding and authorisation are Lotte’s recurring subjects of investigation. By collaborating with the so-called ‘other,’ her work loosely links to post-colonial theory. The stories and characters glisten in ambiguity and inexplicability. They are stories designed to dodge clarification and avoid definitive explanations, cast off stereotypes and challenge conventional analysis. Lotte’s works have been shown and discussed internationally in the European Union and the USA.
lottereimann.de

About the Publisher
APE (Art Paper Editions) is an independent publishing platform founded in 2010 by Jurgen Maelfeyt of Ghent-based design studio 6’56” APE focuses on the book as an exhibition space and makes publications in close collaboration with artists, writers, institutions, galleries, and other cultural protagonists. Publications are crafted to the highest standard. Many of our publications are acquired by institutional libraries such as Moma, Centre Pompidou and Macba amongst others.
artpapereditions.org