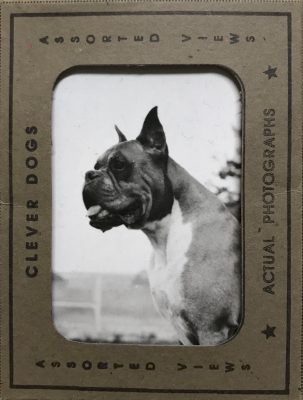 This collection of dog photographs are original black and white photographs made from rephotographed found photos taken by Gertler. The cover is letterpress printed.
(source: email correspondence with Gertler)

Description of Form
This object takes the form of five individual black and white photographs of dogs. They are contained within a frame-like cover, with an opening in which you can see the first photograph. 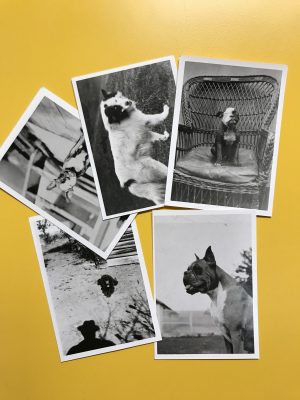 About the Artists
April Gertler is an American artist who has been living and working in Berlin since 2005. She studied Social Science Interdisciplinary Studies at University California, Berkeley (BA, – Hons), Photography at California College of the Arts (BFA) and Photography at Bard College (MFA). April did an exchange semester at the Städelschule in Frankfurt/Main, which is what initially brought her to Germany. After finishing her MFA, she returned to Frankfurt and subsequently moved to Berlin.
(source: http://aprilgertler.com/)

Brian Janusiak is a graphic designer based in New York.
(source: https://www.linkedin.com/in/brian-janusiak-75b025125)

About the Publisher
April Gertler and Brian Janusiak were collectively Marginalia Press. They made a collection of objects similar to Clever Dogs: Actual Photographs.
(source: email correspondence with Gertler)