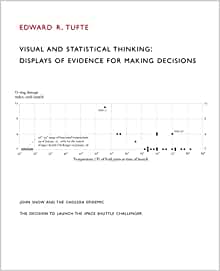 This inexpensive booklet reprints, in full color, chapter 2 of Visual Explanations, analyzing a cholera epidemic in London in 1854 and the evidence used to decide to launch the space shuttle Challenger. Topics include cause and effect, data errors and credibility, evidence selection, and statistical graphics. For teaching data analysis and evidence in decision-making.
(source: https://www.edwardtufte.com/tufte/books_textb)

About the Author
Edward R. Tufte is Professor Emeritus of Political Science, Statistics, and Computer Science. His research concerns statistical evidence and scientific visualization. He is a Fellow of the American Statistical Association, the American Academy of Arts and Sciences, and the Society for Technical Communication. He has received followships from the Guggenheim Foundation and the Center for Advanced Study in the Behavioral Science, and has been awarded seven honorary Doctorates. His publications include Visual Explanations; Envisioning Information; The Visual Display of Quantitative Information; Political Control of the Economy; Data Analysis for Politics and Policy; and Size and Democracy (with Robert A. Dahl).
edwardtufte.com
(source: https://politicalscience.yale.edu/people/edward-tufte)

About the Publisher
Graphics Press is Edward R. Tufte’s own publishing house.
edwardtufte.com