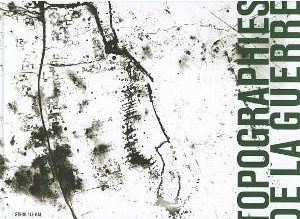 Is it possible to represent war other than by images of combat, corpses and rubble? Topographies of War features photographic and video works that ignore confrontation, injury and death, and instead document war in a disembodied way through its sites, territories and constructed spaces.

This book contains topographical essays that explore war through its geography, without denying the human cost of fighting. In terms of military strategy, such iconographic choices coincide with the increased use of simulation techniques and the spread of long-range weaponry, as well as with the military’s media censorship and the virtual impossibility for photographers and video-makers to operate freely on the ground.

Has the territory of war become an abstract concept, an ideological construction, a given that cannot be represented? Topographies of War tackles this question through the work of Jananne Al-Ani, Paola De Pietri, Walid Raad, Jo Ractliffe, Till Roeskens, Eyal Weizman and Donovan Wylie.
(source: https://steidl.de/Buecher/Topographies-de-la-Guerre-0112223039.html)

About the Artist
Diane Dufour is director of LE BAL in Paris, an independent platform for exhibitions, publications, ideas and education, centered on the contemporary image in all its forms – photography, video, film and the new media – founded in 2010 with Raymond Depardon. Internationally famous for the quality of its exhibitions (Anonymous, Nameless America; Topographies of War; Antoine d’Agata, Anticorps; Paul Graham; Lewis Baltz, Common Objects, Provoke – Photography in Japan 1960 – 1975, etc.), LE BAL aims to combine the visual arts with reflections on society. Ms. Dufour has designed many books on contemporary photographers, including Mark Cohen, Dark Knees; Lewis Baltz, Common Objects; Dirk Braeckman, Sisyphe; Mark Lewis, Above and Below. She also started Curators’ Day, a project exchange platform including 30 European museums. She was head of Europe Magnum Photos from 2000 to 2007.
(source: https://dergreif-online.de/guest-room/diane-dufour/)

Jean-Yves Jouannais (Montluçon, 1964), art critic, cofounded the Revue Perpendiculaire and was editor-in-chief of Artpress for ten years. He has curated prestigious exhibitions such as L’Histoire de l’Infamie at the Venice Biennale (1995), Le Fou dédoublé. L’idiotie dans l’art du XXe siècle in Moscow (2000), Lost in the Supermarket at the Fondation Ricard (2001) and La Force de l’art 02 at the Grand Palais (2009).

About the Publisher
Born in Göttingen in 1950, Gerhard Steidl began working as a printer and designer in 1969. Soon the customers of his screen-printing workshop included Joseph Beuys, Marcel Broodthaers and Nam June Paik, among other well-known artists. In 1972, the first Steidl book Befragung der documenta (Questioning documenta) was published. From political non-fiction he then expanded into literature and selected books on art and photography.
steidl.de
(source: https://steidl.de/Publisher-0211122830.html#:~:text=Born%20in%20G%C3%B6ttingen%20in%201950,among%20other%20well%2Dknown%20artists.)

LE BAL is an independent platform for exhibitions, publications, ideas and education, centered on the contemporary image in all its forms – photography, video, film and the new media. Founded in 2010 by Raymond Depardon and Diane Dufour with the support of Mairie de Paris, it is a non-profit organization.

Since 2008, LE BAL’s educational center, La Fabrique du Regard, has been working in depth with 2,000 young people every year, most of them from schools in underprivileged Priority Education Areas, involving 150 primary and secondary schools and representing 13 education jurisdictions.
The aim is to offer young people the chance to reflect on the world and its images, to train active, concerned observers who are aware that images obey codes and usages and, above all, that they are very much part of the way we think about society.
le-bal.fr
(source: https://www.le-bal.fr/en/project)