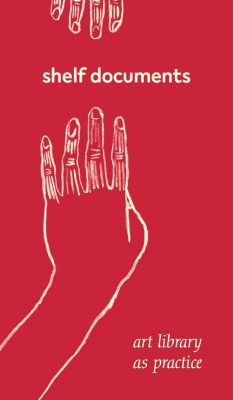 How can art libraries be generative resources and sites of action for all who identify as queer, as women, as Black, as Indigenous, as people of colour? What does it mean to consider the art library as a collective practice that spans multiple scales? In shelf documents artists, writers, curators, teachers, and librarians reflect on their engagements with books, libraries and art-library-as-practice. Between a reader, an artist’s book, a project documentation and a catalogue, shelf documents might recall a pamphlet, a roadmap, or a recipe book that doesn’t tell you what to do. It is a book that gets mis-shelved.

Together they integrated 243 new titles by nonbinary, women and queer artists as well as artists of colour in art libraries as a way to fill gaps, to amplify voices, to seek out the self-initiated and the overlooked. In thinking about diversity in collections, the publication proposes art libraries as sites of intersubjective communion, spanning practices that range from personal bookshelves and the libraries of art schools and universities, to those of spontaneous collectives and the ones associated with major museums.
(source: https://www.printedmatter.org/catalog/57445/)

About the Artists
Heide Hinrichs is a German artist living and working in Brussels. She currently teaches at the Royal Academy of Fine Arts in Antwerp, where she completed a two-year postgraduate program (HISK) in 2006. She also studied at the KHK Kassel and under Ulrike Grossarth at the HfBK Dresden. Following her solo exhibitions, Borrowed Tails (curated by Marisa Sanchez) at the Seattle Art Museum in 2010, and Echoes (curated by Susanne Weiß) at the Heidelberger Kunstverein in 2012, she was awarded the Villa Romana Fellowship for 2013. In 2014, she was a fellow at the MMCA Seoul International Residency Program, where she continued work on her long-term, ongoing project silent sisters / stille schwestern, a translation in text and art works in conversation with Theresa Hak Kyung Cha’s book, DICTEE.
(source: https://whitehousegallery.be/en/artists/heide-hinrichs)

Jo-ey Tang is a Hong Kong-born American curator, artist, writer, in non-hierarchical order. He began working alongside artists at The Notary Public in 2010 in his New York City apartment while a graduate student at New York University. He was arts editor of literary journal n+1 from 2009 to 2014, curator at Palais de Tokyo, Paris in 2014 and 2015, and director of exhibitions at Beeler Gallery at Columbus College of Art & Design, from 2017 to 2020, and digital community manager of Denniston Hill, New York in 2021. He currently lives in San Francisco, where he serves as director of KADIST San Francisco.
jo-eytang.com
(source: https://www.jo-eytang.com/contact/)

Elizabeth Haines is a painter, illustrator and teacher, born in Hertfordshire, who studied at St Albans and Brighton Colleges of Art, graduating in graphic design in 1967, in 1968 moving to Pembrokeshire. Taught at Carmarthen College of Art, 1982–4. In 1987 she was artist-in-residence at the National Eisteddfod, having won a national competition to interpret the forms of Cerdd Dafod (Welsh prosody). Haines occasionally held open studio in her 1996-converted barn on Bryn Morris hill farm, Rhosfach, Clunderwen. For many years she was almost exclusively a landscape painter, influenced by the British watercolourists, but in the early 1990s diverted towards architecture and musicians. She made drawings at rehearsals and masterclasses at the Royal Academy of Music in 1994, linked to a WAC bursary to research the relationship between painting and music.
(source: https://artuk.org/discover/artists/haines-elizabeth-b-1945)

About the Publisher
b_books is a book trade and publishing collective in berlin-kreuzberg. Founded in 1996 by political activists, theorists, filmmakers and artists, it runs a bookshop, venue and publishing house specializing in political philosophy, art and film, queer feminist and postcolonial theory is. events have been held under the title montagsPRAXIS since the 1990s. the publishing house started in 1998 with publications by a. negri, l. singer, c. Kraus, M. Lazzarato, H. Farocki, pb preciado, j. rancière and series on urban theory, politics and art criticism.
bbooks.de
(source: https://www.bbooks.de/)