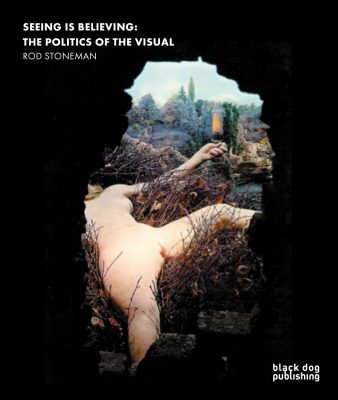 Several thousand times a day we assimilate visual imagery at speed, a process accelerated in the digital world. Everyone ‘knows’ images can be false or deceptive, but we all live and work in constant denial of this idea and its implications. In a world saturated with media we act as though we are immune to their effects. Structured in six parts – ‘History/Politics’, ‘Art/Culture’, ‘Film/Television’, ‘Products/Possessions’, ‘The Quotidian/The Strange’, ‘Verisimilitude/Delusion’ – the book analyses clusters of images to explore differentiated themes of pictorial operation including photography, graffiti, painting, film and television.

Seeing is Believing is an invitation to an intimate voyage that is permeable to the world’s upheavals, exploring the potential for contemporary forms of artistic practice to create new spaces for active participation in culture and society.
(source: https://collection.photoireland.org/photobooks/seeing-is-believing/)

About the Artist
Professor Rod Stoneman is the Director of the Huston School of Film & Digital Media at the National University of Ireland, Galway. He was Chief Executive of Bord Scannán na hÉireann / the Irish Film Board until September 2003 and previously a Deputy Commissioning Editor in the Independent Film and Video Department at Channel 4 Television in the United Kingdom.
(source: https://www.nuigalway.ie/our-research/people/humanities/rodstoneman/)

About the Publisher
Black Dog Publishing specialises in beautifully produced illustrated books that represent a fresh, eclectic take on contemporary culture. Starting from a base in art and architecture, we have grown to embrace subjects as varied as design, fashion, music and environmental concerns.
blackdogonline.com
(source: https://www.designersandbooks.com/publisher/black-dog-publishing)