Acts Of Seeing: Artists, Scientists and the History of the Visual
Assimina Kaniari and Marina Wallace 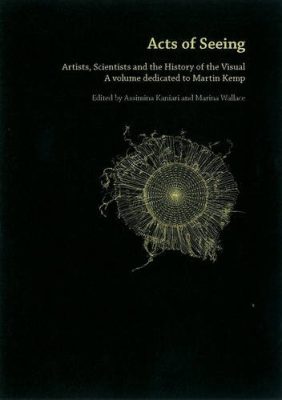 Acts Of Seeing: Artists, Scientists and the History of the Visual
Assimina Kaniari and Marina Wallace
Artakt
English

This book is in homage to Martin Kemp, his special and unconventional ways of looking at the world and speaking about it, his contribution to art history and the history of the visual, his continued engagement with theorists and practitioners, not to mention students of all walks of life across the many years of his academic career.

Acts of Seeing is a title coined by Martin Kemp to describe a collection of essays assembled by artists, theorists, historians, engineers and scientists on the theme of structural intuitions a very dear technique in Martin Kemp’s cross cultural comparisons between art and science. The essays and visual contributions dedicated to Martin Kemp in this volume are by some of the scholars and practitioners who have benefited from knowing him and exchanging views with him.

About the Editors
Asimina Kaniari received her doctorate from the Department of Art History, University of Oxford, working under Martin Kemp on the location of the ornament in 19th century science and aesthetic theory and is currently an Assistant Professor in Art History at the Department of Art Theory and History of the Athens School of Fine Arts.
(source: https://hellenic.princeton.edu/people/asimina-kaniari)

Marina Wallace is a curator for the The Ashmolean Museum at the University of Oxford. She is also a director at Artakt.
(source: https://uk.linkedin.com/in/marina-wallace-8b21a127)

About the Publisher
Artakt curates and manages pioneering exhibitions and research led projects at a national and international level in the field of art, science and culture.
At the centre of Artakt is the conviction that art, science and culture individually and, above all, collectively, can and should be communicated as creatively, accurately and widely as possible in a daring and innovative way at the highest visual level.
artakt.co.uk
(source: https://fadmagazine.com/2010/03/06/12201/)