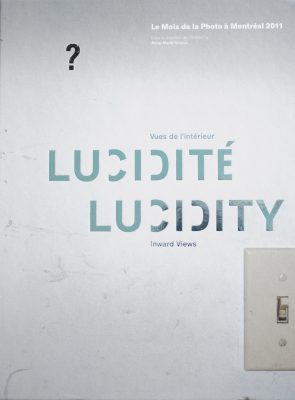 In this lavishly illustrated book, guest curator Anne-Marie Ninacs introduces the 25 artists whose works are exhibited in this international biennale of contemporary photography. The publication also features new essays by philosophers, art historians, and theorists of visual culture, who shed light on the relationships between photography and lucidity. The artists presented here in a way turn their cameras towards themselves and conceive of lens-based arts as an introspective process, an opportunity for meditation, a mode of consciousness, even as a means of revealing the unconscious. At a time when misery in the world is multiplying, the movement toward a form of photography that seeks to reveal the invisible conflicts and traces of wisdom within ourselves seems urgent. This book humbly cultivates the hope that such photography can give us all a bit of the “transparency of mind” that is the psychological meaning given by the modern world to the term lucidity. With essays by Pierre Bertrand, Maxime Coulombe, Robert Enright, Roger Lipsey, Anne-Marie-Ninacs, Christine Ross, and Richard Shusterman.

For each edition, Le Mois de la Photo à Montréal produces an important, lavishly illustrated publication. More than an exhibition catalogue, the publication is an autonomous and authoritative reference book edited by the guest curator and addressing his or her theme. The publication includes a curatorial essay, essays by renowned authors, and a rich section of colour illustrations of contemporary artists’ works. This reference work has a print run of 1,500 copies, is entirely bilingual (English and French), and is distributed in Canada and abroad.

About the Artist
Anne-Marie Ninacs is an independent researcher and curator based in Quebec. Guest Curator of Le Mois de la Photo à Montréal 2011, she developed the event (25 solo exhibitions, a 350-pages scientific publication and a colloquium) under the theme Lucidity. Inward Views. From 2002 to 2006, she acted as Curator of Contemporary Art at the Musée national des beaux-arts du Québec where she has signed several exhibitions, namely Massimo Guerrera. Darboral; Diane Borsato. Annie-Marie Ninacs is professor at the School of Visual and Media Arts at UQAM, where she has been teaching art education and studio arts students since 2013.
(More information on Anne-Marie https://docinterhar.org/program/students/our-graduates/anne-marie-ninacs-2/)

About the Publisher
Le Mois de la Photo à Montréal is a leading international biennale dedicated to the contemporary image. Since its beginnings in 1989, MPM produces a unique and exciting opportunity to discover the latest trends in photography, video and lens-based art. For each edition, a guest curator proposes a theme to explore and selects roughly 20 to 40 artists whose works are presented in 15 venues across Montréal. The exhibitions are complemented by a major publication, an international colloquium, the Dazibao Prize, a portfolio review, as well as a series of artists’ talks, video projections, workshops, and guided tours for all ages.
moisdelaphoto.com