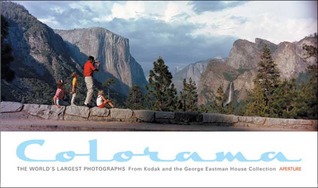 Billed as “The World’s Largest Photographs,” Eastman Kodak’s 18-by-60-foot Coloramas brought photography to the masses with a spectacular display of communicative power. During its forty-year run in Grand Central Terminal in New York City, the Colorama program presented a panoramic photo album of American scenes, lifestyles, and achievements from the second half of the twentieth century.

Produced in association with the George Eastman House Collection, Colorama explores the history of these colossal images. A selection of the most striking images are beautifully reproduced, making these images available to viewers nostalgic for American life in decades gone by, as well as people with a personal connection to the original display in Grand Central Station.
(source: https://aperture.org/books/colorama/)

About the Publisher
Aperture, a not-for-profit foundation, is a magazine and photography organisation. Created in 1952 by photographers and writers as ‘common ground for the advancement of photography,’ Aperture today is a multi-platform publisher and center for the photo community. From their base in New York, we produce, publish, and present a program of photography projects, locally and internationally.
aperture.org
(source: https://aperture.org/about/)